How did the Regulating District evolve?

1895: The concept of flood protection in New York State through dams and reservoirs is first suggested. 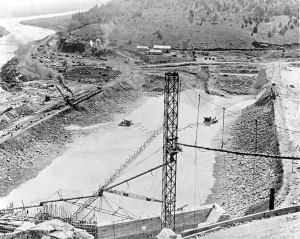 Construction of the Conklingville Dam to Regulate Flows on the Sacandaga and Hudson Rivers.

1924: The Stillwater Reservoir on the Beaver River in the Black River Area is enlarged by raising an existing dam to increase capacity and control.

2002: The Federal Energy Regulatory Commission issues a FERC license to the Regulating District for the Great Sacandaga Lake, which incorporates the Upper Hudson/Sacandaga River Offer of Settlement.

2005: On September 26, 2005 the Regulating District celebrated the 75th anniversary of the completion of the Conklingville Dam and the creation of the Great Sacandaga Lake.