What does The Hudson River-Black River Regulating District do?

Reducing floods and drought in the Hudson River and Black River valleys of New York State is a delicate balance. It’s a balance that happens, not by accident, but by conscious and carefully applied water conservation and management methods. 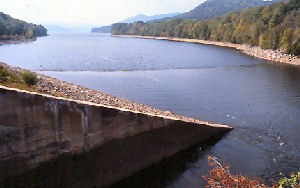 This vital service is nearly invisible to the people it serves, including residents, communities, and business and industry located along the Hudson and Black Rivers. For more than three-quarters of a century, the Hudson River-Black River Regulating District has performed this delicate balancing in these two major watersheds by means of a network of the following dams and reservoirs:

This network includes the largest reservoir in New York State, the Great Sacandaga Lake (formerly known as the Sacandaga Reservoir), which was created by the Conklingville Dam on the Sacandaga River.