Why did New York State form the Regulating District? 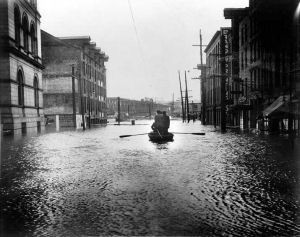 Spring Flooding of Downtown Albany in the early part of the 20th century. Such deadly flooding inspired state leaders to form the Regulating District.

New York State created the Regulating District to develop dams and reservoirs to capture excess run-off to prevent flooding in the Hudson River and Black River basins, and to release such captured water gradually during periods of low river flow to maintain water quality in each river basin. This system was designed to reduce damage from spring storms and snowmelt, including disease and destruction of life and property, and to improve river navigation and public sanitation.

In addition, the creators of the Regulating District were also keenly aware that this increased and carefully monitored flow would also fuel downstream industries, such as hydroelectric power generation. Hydroelectric power is a clean and renewable energy source that is created when the water is directed through a turbine, which activates a generator that produces electricity. Utilizing water released from the Regulating District’s reservoirs, these hydroelectric plants produce enough clean and renewable electricity for over 450,000 homes.